During the recent MDM 2015 (Moden Day Marine) event in the United States of America, an interesting version of the Wiesel 2 was presented (and apparently marketed to the USMC) by Rheinmetall. 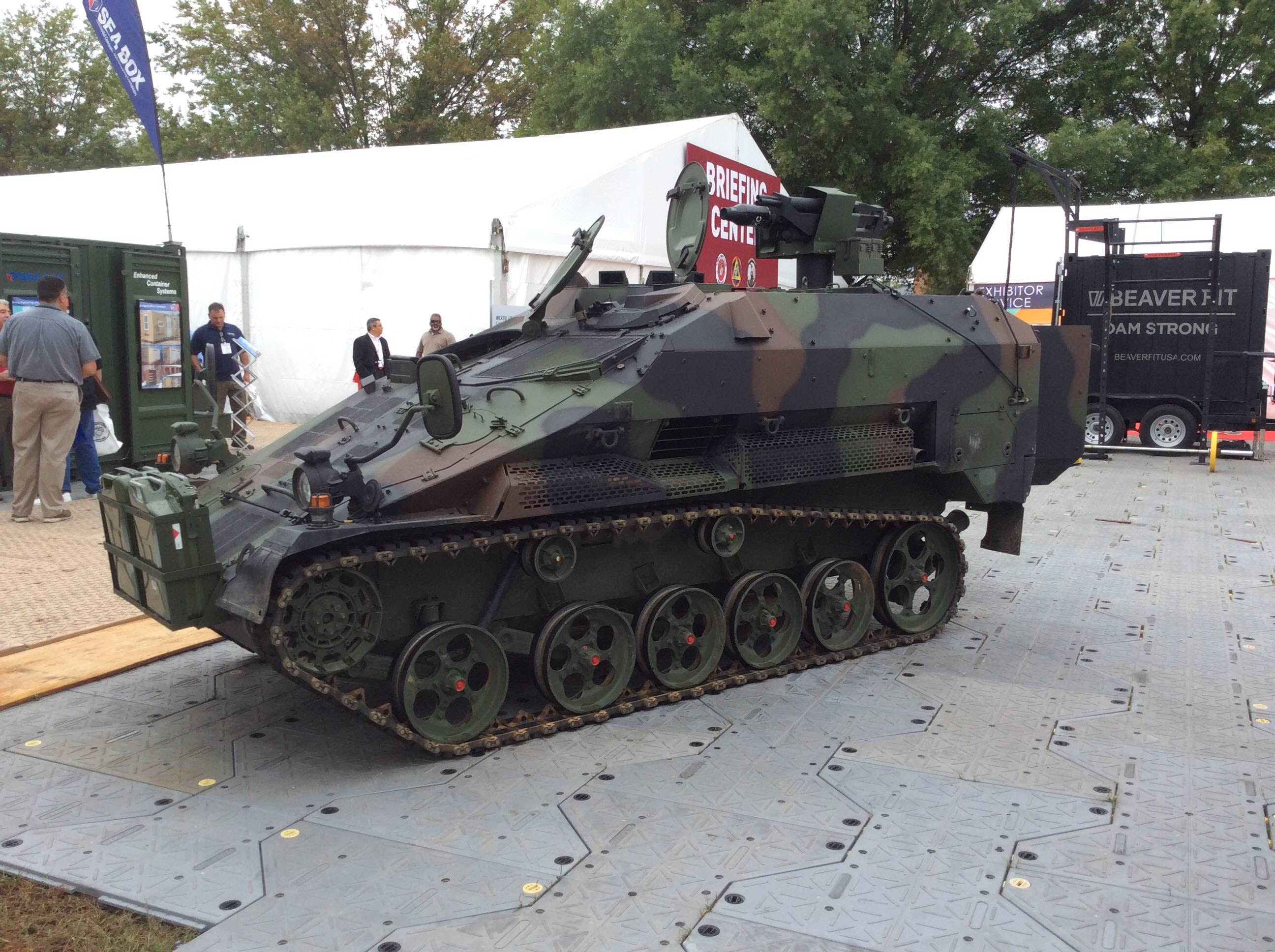 The vehicle is configured as armored personnel carrier (APC) and seems to provide enough space for six dismounts, a driver and a gunner (although it might be 5 or 7 dismounts, the available photographs are limited).
The most interesting aspect however is the weapons choice. The remote weapon station (RWS) is fitted with a rocket-propelled grenade launcher (in the vehicle shown at MDM there was a mock-up of one of Dynamit Nobel Defence's RGW weapon systems) and a three-barreled 7.62 mm machine gun made by Rheinmetall. It seems to be the externally powered RMG 7.62 machine gun that Rheinmetall first presented in 2013. Unlike gatling-type machine guns (miniguns), the RMG 7.62 does not use multiple barrels to incease the rate of fire (RoF), but rather to increase the longevity of the weapon, while having a RoF of a modest 800 rounds per minute. 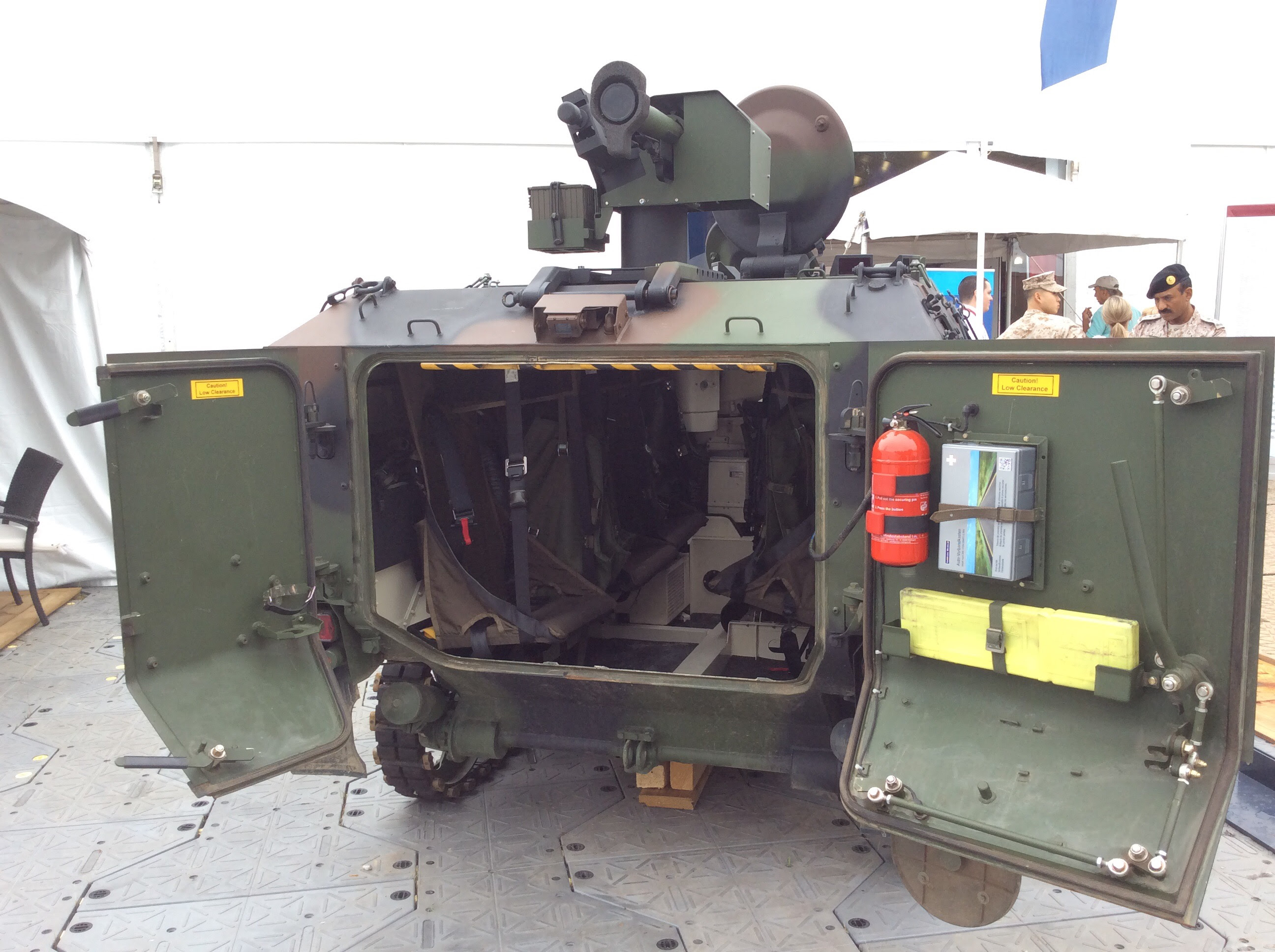 It seems reasonable to assume that the weapon station might be modular and able to handle other machine gun systems (such as the MG3 and the M2 Browning) and recoilless weapons (such as the AT-4 or maybe some fire-and-forget systems such as Javelin).

Panzerhaubitze 2000 and other former-German equipment sold to Lithuania


The Lithuianian ministry of defence (MoD) announced on 28th of September 2015 that the army has purchased a total of 53 combat vehicles from Germany. The contract was signed one day later on the 29th of September.

The complete purchase includes:
The total costs of the deal was €58.3 million, which will be alocated until 2019. €16.2 million were paid for the 53 vehicles, while €42.1 million were paid for modernization, upgrading the new vehicles with communication and mangaement systems as used by the Lithuanian army, and for adjusting military infrastructure for the Panzerhaubitze 2000 as well for training personnel.

The Panzerhaubitze 2000 (PzH 2000) is a self-propelled howitzer equipped with a 155 mm L/52 rifled gun. The chassis is made of armor steel and provides a relatively high level of protection (supposedly equal to the Leopard 1 hull). Additional armor can be mounted on top of the Panzerhaubitze 2000 roof in order to provide adequate protection against counter-battery fire and bomblets. The useage of many Leopard 1 and Leopard 2 military off-the-shelf (MOTS) components reduces the unit price of a PzH 2000.
Compared to the previous 105 mm towed artillery used by the Lithuanian army, the PzH 2000 has more than three times the effective firing range - according to the MoD, the PzH 2000 can accurately engage targets up to 40 kilometers, while the 105 mm howitzers have a range of 11 kilometers.

The M577 V2 command post vehicle is originally an American vehicle based on the M113. The German army bought 220 M577A1 vehicles during the Cold War. The designation M577 V2 seems to be local or it might be a mistranslation of the German NDV2 upgrade, that was applied to several M113-based vehicles. The NDV includes a new and more powerful engine (providing 300 hp output, made by MTU) and a new transmission.

The Bergepanzer 2 (BPz 2) is an armored recovery vehicle based on the Leopard 1 chassis.

The delivery of the first vehicles is expected to begin in 2016, the last vehicles should be received as of 2019.

Meanwhile the decision for an 8x8 wheeled infantry fighting vehicle has not been made yet by the Lithuanian armed forces. While - as previously reported - the army prefers the German Boxer, other parts of the Lithuanian military and/or government seem to dislike the high unit costs of a Boxer. The total costs supposedly are about €500 milions and the unit costs are supposedly 35% higher than some other alternatives investigated by the Lithuanian army according to an interview of the Lithuanian newspaper DELFI (use google translator).
On the other hand the Boxer with Puma turret (nicknamed PuBo by German officials) is probably the most capable vehicle offered to Lithuania.
Posted by m.m. at 6:20 AM No comments:

Rheinmetall has offered a special version of the Boxer to Australia as participation in the LAND 400 program. The Boxer Combat Reconnaissance Vehicle (CRV) is a version of the Boxer IFV with Lance Modular Turret System (Lance MTS), a version already showcased earlier in 2012 on the Eurosatory defence expo. Rheinmetall is partnering with Northtrop Grumman in order to increase chances of winning the contract.


The Boxer CRV is armed with a MK-30/2 ABM autocannon and an anti-tank missile system, which yet has to be disclosed.  The MK-30/2 ABM gun is chambered in the 30 x 173 mm caliber and is gas-operated. It is dual-belt fed and has been equipped with an additional magnetic coil to allow the use of programmable air-burst ammunition. For this the muzzle velocity of the fire round is measured and via the magnetic coil the timer inside the projectile is set, which should result in a higher precision of the air-burst.
Available ammunition includes armor-piercing APFSDS, KE-TF (air-bust fragmentation against infantry), FAPDIS (frangible armor-piercing) and PELE (Penetrator with Enhanced Lateral Effect) ammunition.
As secondary armament a 7.62 mm machine gun can be fitted coaxial to the main gun.

The Lance MTS is fitted with two Rheinmetall SEOSS sight units, which both include a day-channel aswell as a third-generation thermal imager. One of the sights is mounted at the front of the turret, whereas the other one is placed on top of the turret. Furthermore the Lance turret might be fitted with  two units of Rheinmetall's Situational Awareness System, which provide a 360° view of the close proximity.
In one trailer from Rheinmetall, the Boxer CRV has been fitted with SAAB's Barracuda Mobile Camouflage System.

The Boxer MRAV (multi-role armored vehicle) is the final result of a program, which originally was iniated by Germany, France and the UK to build a heavily protected common wheeled multi-role platfrom for all three countries. The Boxer is a modular vehicle, allowing to adopt different mission modules on the same chassis. It is well-protected by AMAP composite armor and fitted with a high level of built-in mine and IED protection.

UK to look for Challenger 2 replacement

As reported by the UK-based defence news agency Jane's IHS, the UK is looking for either an upgrade or a replacement for the Vickers Challenger 2 main battle tank.

Following the introduction of the T-14 Armata tank, the British army has questioned the ability of the Challenger 2 - in particular the performance of the L30A1 tank gun with two-piece ammunition - to be suited for future combat operations.

According to Jane's, the British army has already talked to several armored vehicle manufacturers about upgrading the Challenger 2 or replacing the tank.
Posted by m.m. at 7:06 AM No comments:

Patria and BAE have teamed up to participate in the LAND 400 program from the Australian army.
The LAND 400 seeks for a wheeled vehicle with heavy armor (STANAG 4569 level 6 - protection against 30 mm APFSDS at the frontal arc) in the versions Combat Reconnaissance Vehicle (CRV), Infantry Fighting Vehicle (IFV), Manoeuvre Support Vehicle (MSV) and Integrated Training System (ITS).

The vehicle chosen as part of the LAND 400 program is expected to replace the old M113AS4 IFV (a version of the M113 with 25 mm gun turret) vehicles and replace a number of ASLAVs (a version of the Swiss Piranha).


The AMV 35 CRV seems to be a normal Patria AMV hull fitted with the turret of the BAE CV9035. The turret is housing an exteranlly-powered 35 mm Bushmaster III autocannon, which offers increased lethality over the more common 25 and 30 mm calibers. A barrel swap allows the usage of larger 50 mm supershot ammunition.
However ammunition stowage is poor compared to smaller calibers. The CV9035 has 2 belts of 35 rounds each loaden in the main gun, which is what should be expected from the AMV 35 CRV aswell. A total of 140 further rounds are stored inside the CV9035, a similar number of additional ammunition might be stored in the AMV 35 CRV.

The turret is a welded steel construction which is fitted with additional modules of composite armor and the SAAB Universal Tank and Anti-Aircraft Sight (UTAAS) fire control system.

The Patria Advanced Modular Vehicle (AMV) is a proven 8 x 8 wheeled vehicle, which has been rather successful on the export market in the past years.
Posted by m.m. at 6:42 AM No comments: