Compared to the current versions of other tanks (like the Leclerc, Leopard 2 or Abrams), the Challenger 2's performance and design are lackluster in a number of points. In terms of mobility, the CR2 is underpowered thanks to using an old Condor-Perkins V12 engine with a rather low output of only 1200 hp output. This leads to a lower hp per ton ratio than common on other tanks of Western and Eastern origin. While the CR2 is fitted with a rather advanced hydrogas suspension, this is still rather mediocre, because the wheel travel - which determines the suspensions performance in heavy terrain - is only average and by about 10 to 20% smaller than the wheel travel on some other modern tanks.
The biggest issue of the Challenger 2 is however the fire control system (FCS). Even the Challenger 2E with improved FCS was not able to compete with the alternatives from France, Germany and the US in the Greek tank trials. Due to being designed as retrofit option to the Challenger 1 and even the Chieftain tank, its FCS is in many design aspects antiquated by more modern standards. Compared to the usual configuration on all other Western tanks, the TOGS-2 thermal imager and the gunner's main sight are two separate units. This causes a number of issues in terms of stabilization (mostly caused by mounting the TOGS-2 on the rather unstable gun) and line-of-sight alignment. When aiming at high elevations, the TOGS-2 won't be able to see the target.
While all modern tanks since the 1990s are fitted with a thermal imaging system as part of the independent optronics of the commander, the commander of a Challenger 2 has only a day sight. During operations with low visibility (night operations, dusty/desert environments, etc.) the commander of the CR2 has to fall back to mirroring the image of the gunner's TOGS-2 into his own optics. So currently, the Challenger 2 design does not allow hunter/killer operations during night.
The main reason why the British Army demanded an upgrade for the Challenger 2 was the questionable lethality of the L30A1 tank gun. When the Russian Army presented their new T-14 Armata tank, the lackluster penetration of the L30 gun made the British Army worry, wether this weapon is still useful. Unlike pretty much all other modern tanks (bar the Arjun, but this isn't really modern in various aspects), the Challenger 2 uses a rifled gun. This means the gun barrel has grooves at the interior, which leads to two problems: for one, they limit the maximum pressure for autofrettage, which directly affects the maximum operating pressure for tank ammunition - the L30 gun of the Challenger 2 cannot withstand as high pressures as the old Rheinmetall L44 gun from 1979! The second problem of the rifling is the increase of the internal surface by 20-30%, which increases surface friction and thus reduces muzzle velocity. In fact the British Army even considered replacing the Challenger 2 due to the L30A1 gun's poor performance.

The L30A1 gun uses three-piece ammunition: the projectile, propellant charge and primer are separate parts, a design decision that affects both lethality and storage options. The ammunition stowage of the Challenger 2 is designed to accept only certain types of ammunition parts (propellant charges, primer magazines and projectiles) at certain places (for example all propellant charges are stored within the hull below the turret ring). It is not possible to fit longer or wider ammunition into a CR2, which prevented the upgunning of the Challenger 2 with the German 120 mm L55 smoothbore gun during the Challenger Lethality Improvement Programme (CLIP). It was only possible to create storage for six rounds of unitary 120 x 570 mm NATO ammunition without deeper modifications of the Challenger 2's interior layout.
The length limitation imposed by the ammo rack design and location also affects armor penetration with compatible ammunition. In order to improve penetration characterstic, the length of the penetrator has to be increased besides muzzle velocity. This is not an option in the CR2.
Last but not least, the rifled gun and the three-piece ammunition design require larger-than-average sabot petals, which increases the parastic mass propelled by the powder and thus lowers armor penetration.

General Dynamics, originally an own contender for the Challenger 2 upgrade and considered one of the favorites for being among the two shortlisted companies, decided to withdraw from the competition and not offer an upgrade solution to the British Army. Instead General Dynamics has jointed the Team Challenger 2, which is lead by previous competitor BAE Systems. 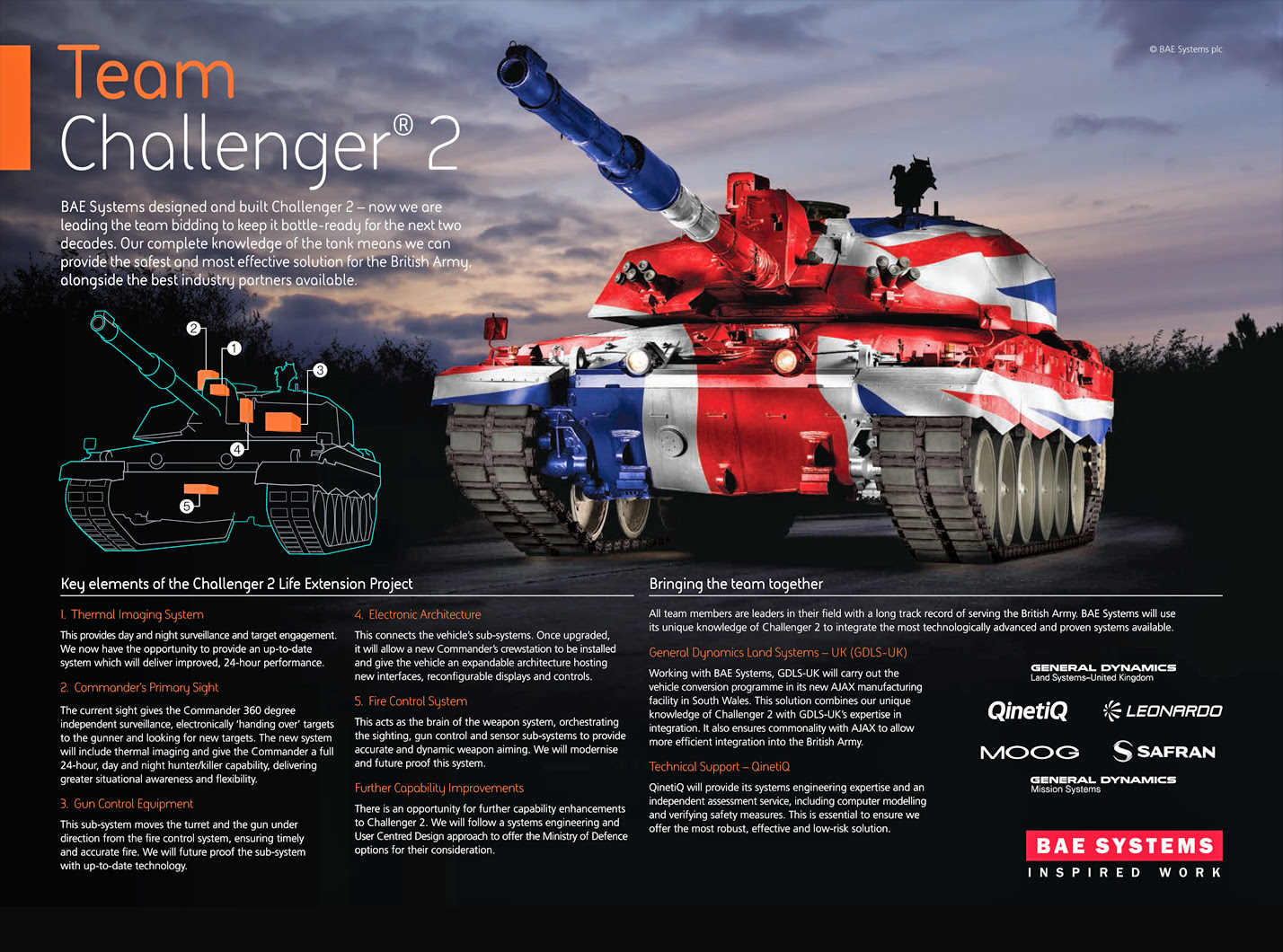 The Team Challenger 2 consists of BAE Systems, General Dynamics (Land Systems UK & Mission Systems), QinetiQ, Leonardo, MOOG and Safran.
The upgrade proposed by Team Challenger 2 is limited to the electronics and optics of the tank only. The thermal imager of the TOGS-2 is replaced with a better model (but apparently still located in the same bad spot at the gun barrel), the commander's primarey sight now also includes a thermal imaging system for day and night operations, while the gun control systems and fire control systems are upgraded/replaced. The proposal from Team Challenger 2 also includes a new electronic architecture for the computer systems of the tank.
However the tank is still underpowered, nothing on the drivetrain or powerpack has been changed. It also lacks an active protection system (APS), which is currently in the process of becoming a standard for modern armored fighting vehicles.
Let's also not forget about the elephant in the room: a Challenger 2 upgraded according to the proposal of Team Challenger 2 still uses the same old gun as the original tank. The Challenger 2 Life Extension Programme (LEP) was mostly initiated because the CR2 gun and ammunition combo doesn't offer enough performance against the T-14 tank! How can they not try to change it!

There is however a glimmer of hope for the CR2. Team Challenger 2 claims that they would like to offer further upgrades and have proposed such - so we might see more. Apparently the British Army is actively looking into the topic of APS, but with a different contract independent of the Challenger 2 upgrade. The CR2 might receive an APS in the future, but this wouldn't be related to the LEP.
Also it has been rumored already a few years ago, that the British Army has tested uprating the Challenger 2's V12 engine to about 1500-1600 horsepowers, albeit this supposedly was stopped following a great increase in engine and track wear.