Nexter has presented a Leclerc tank upgraded according to the demands of the French Army. In 2015 the French Army ordered a total of 200 Leclerc tanks to be upgraded to this specific configuration. The Leclerc is the French main battle tank (MBT) and entered service in the early 1990s, replacing the 1960s AMX-30 tank. It features a 1500 hp hyperbar engine, an hydropneumatic suspension, a 120 mm L52 smoothbore gun with autoloader, a modern fire control system (FCS), and (semi-)modular composite armor. 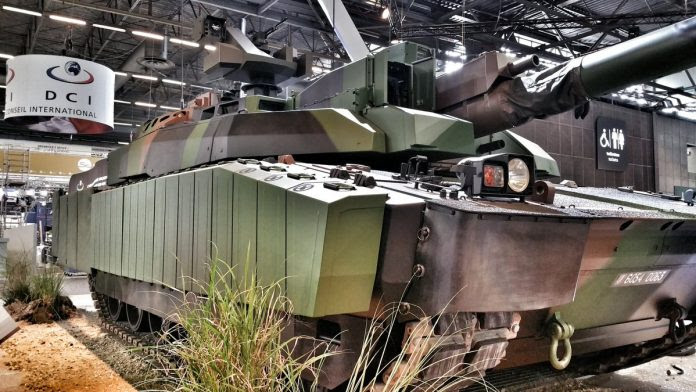 However the configuration presented at Eurosatory 2016 seems to be slightly downgraded compared to earlier 3D renderings of the Leclerc upgrade. The upgraded Leclerc features a remote weapon station (RWS), new radios, the SCORPION battlefield management and command system aswell as additional modular armor at the hull and turret. The frontal two thirds of the hull flanks are protected by thick passive armor, while the last third and the rear are fitted with slat armor only. The turret rear is also protected by slat armor. New electronics allow firing air-bursting high-explosive ammunition.

Compared to the earlier renderings, the Leclerc upgrades lacks the wire-cutters located on the turret and hull aswell as the additional smoke grenade launchers at the turret front and sides. The laser-warning sensor required to turn the Galix smoke screen system into a softkill active protection system (APS) and the close-proximity surveillance system were also not adopted with the upgrade.
It appears that budget is once again a killer of military innovation. Even a tank upgraded to the better configuration used for the renderings has been considered here to be somewhat lackluster, because this seemed to be too focused on assymetrical warfare, lacking any improvments really relevant for tank-vs-tank combat or symmetric warfare (such as a more powerful gun, better frontal and roof armor or a hardkill APS).