First footage of the Karrar MBT

The Iran is working on a new main battle tank (MBT), which has been nick-named the Karrar MBT. While most details are unknown, first footage of the new MBT has been released on state-owned TV and found it's way onto the internet. According to the Iranian TV, the tank is supposed to be completely built and designed in Iran. 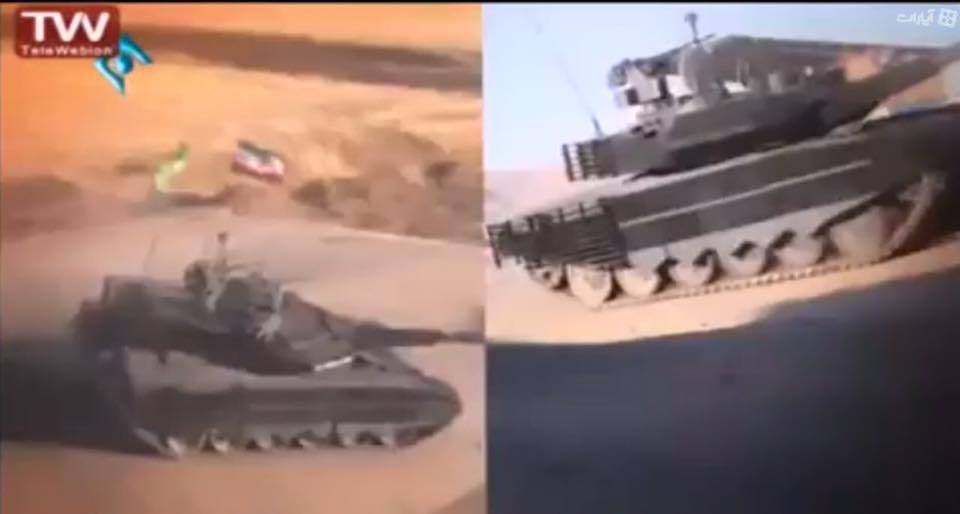 The tank appears to be very similar to the Russian T-90MS tank in terms of shape and layout; it features a welded hull and turret, which is protected by explosive reactive armor (ERA) and on the rear sections by slat armor. In fact the vehicles appear so similar, that the Karrar tank should be either a licence-made version of the T-90MS or an intentional attempt to copy it. Claims about the Karrar being a locally developed tank might be propaganda or be result of a planned licence-assembly (Iran already manufactured a number of T-72S tanks under licence.)
The tank has six roadwheels partially covered by the side skirts. These skirts have the same wave-pattern found on the T-90MS' side skirts, but currently found on no other Russian, Chinese or Ukrainian tank. Ontop of the side-skirts are two rows of flat ERA tiles, the engine compartment is protected by slat armor only.
The welded turret has a rhombus shape with a noticeable rear-extension, which in case of the T-90MS acts as external storage and is not accessable from the internal. The frontal arc of the tank is protected by very flush aligned ERA tiles, which in case of the T-90MS is the latest Relikt ERA and not the older Kontakt-5. The rear side section of the turret is protected by a flat layer of spaced composite armor, while the rear is only protected by slat armor. 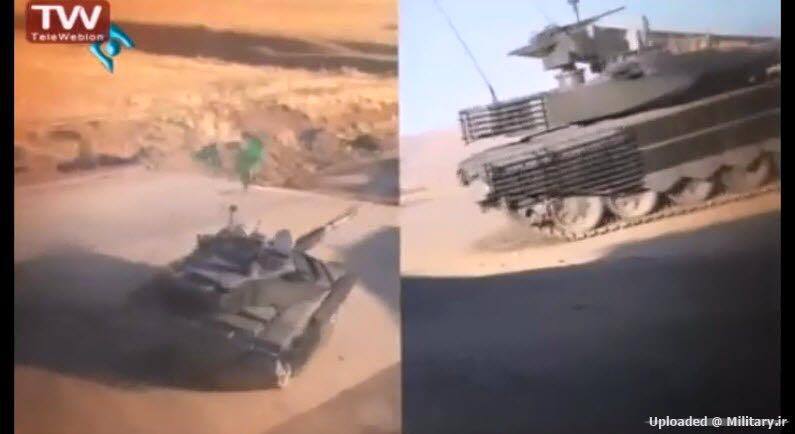 There are a few differences between the Karrar and the T-90MS noticeable even in the low quality footage. The remote weapon stations (RWS) appears to be of a different type and is equipped with a larger machine gun (most likely a 12.7 mm or 14.5 mm HMG). It might not only replace the original RWS, but also the commander's independent sight, unless the placement of the latter was altered. There is also a new distinctive polygonial sleeve at the base of the gun barrel. This feature is not found on any T-90MS prototype.
Another apparent difference is the lack of additional fuel barrels at the rear of the hull. While this certainly could be a result of different doctrines (or the fuel barrels have been disconnected from the tank, after they were empty), this also could be another reason to assume that this tank is a copy of the T-90MS rather than the original.


While using different technology, the Iranian Zulfiqar 3 tank (actully Zolfaqar would be a more correct name, but the tank has become known as Zulfiqar in the English-speaking internet) is known for intentionally resembling the US M1 Abrams tank.
This is supposed to be result of two different aspects: some sources claim that this way the Zulfiqar 3 tanks should be spared from US airstrikes (being mistaken for Abrams tanks by the pilots) or the US should suffer from higher amounts of friendly-fire incidents in case of attacking Iran. Other sources claim that the design similarities to the Abrams are the result of the Iran lacking knowledge in tank production and simply trying to copy the Abrams with the available technology, because it proved to be hugely successful against Iraqi tanks.


Regardless of being a copy or a licence-built variant, the main armament of the Karrar MBT is most likely a 125 mm smoothbore gun. The T-90MS is fitted with the improved 2A46M-5 tank gun; this is designed for enhanced barrel life and greater accuracy. Unlike the 2A46M, the gun has an internal chrome-plating, which increases the barrel life by the factor 1.7. The gun assembly includes two additional elements with rollers to take up some of the play. Together with other modficiations, this is claimed to reduce dispersion by 15% and thus increases the accuracy and range.
If the Karrar MBT is not a T-90MS, but an elaborate attempt to copy one, it most likely would be armed with the slightly worse 2A46M-2 gun, which has been used on the T-72S Shilden MBT. This gun is a bit less accurate and durable than the 2A46M-5. In terms of penetration power, both of these guns are build for an increased maximum chamber pressure of 650 MPa, compared to the 510 MPa of the earlier 2A46 and 2A46M tank guns used on the T-72M and T-72M1 (and encountered by the US military during Gulf War and Operation Iraq Freedom). Iran is known to produce the 3BM-42 "Mango" APFSDS, which is currently the most advanced APFSDS exported by Russia (despite being introduced in Soviet service in 1986). It uses a two-piece tungsten penetrator in a steel sheat to penetrate on average about 470-500 milimetres of steel armor at 2,000 metres distance.
While the Mango APFSDS does fit into the T-72S and T-90MS - thus most likely also in the Karrar MBT - using longer APFSDS for increased armor penetration is only possible in the upgraded autoloader of the T-90MS.


If the Karrar is in fact just a local designation for the T-90MS, it will result in a major upgrade to the capabilities of the Iranian Army and Revolutionary Guards. In some aspects the T-90MS tank is ahead of the current M1A2 SEP, in others at least on par and in some still worse. With modern ammunition and skilled crews, this tank could pose a serious threat even to current NATO MBTs.
If the Karrar is just a copy made to resemble the T-90MS however, the tank will probably be a failure. Not only is the Iranian industry still lacking behind in terms of capabilities compared to the current Russian, Chinese and NATO tanks, the production capacities are also too limited to produce a larger amount of tanks. Supposedly the amount of produced Zulfiqar tanks is highly limited, some sources claim that less than hundred Zulfiqars have been made. No version of the Zulfiqar is protected by ERA, while only the later versions have composite armor. In so far, the T-72S is probably the backbone of the tank force operated by the Iranian Army and Iranian Revolutionary Guards. Still large amounts of T-55/Type 59 tanks, Pattons and Chieftains have remained in service - some of them have been upgraded to Type-72Z Safirs, Mobarez tanks or to the Sabalan and Tiam configurations.


Until the Karrar MBT is ready, the most advanced tank in Iranian service might still be the T-72 Khorramshahr, a rare upgraded version of the T-72, featuring an Ukranian welded turret with Kontakt-5 ERA and a more modern fire control system than the T-72S. It is however a very rare tank, the numbers of T-72 tanks converted to T-72 Khorramshahr might be smaller than the production of the latest Zulfiqar 3 tank.
Posted by m.m. at 1:31 PM