The Ukraine develops the Otaman family of wheeled vehicles

At the Ukranian Arms and Security 2016 (Зброя та безпека 2016) exhibition, the new Otaman 6x6 and 8x8 wheeled vehicles were presented for the first time. The two vehicles have been developed by the company Practika.


The Otaman concept was first presented in March at the Indian Defexpo 2016 by the Ukranian state-owned military agency UkrOboronProm. The Otaman concept takes existing military trucks such as the ones manufactured by GAZ, KRAZ, Ural or Zil and adds a protective plating made of armor steel (RHA) and an internal kevlar liner to it. According to Army Recognition's coverage of Defexpo 2016, this would allow to transform a typical 4x4 truck into a 7.5 tons heavy APC with a crew of two and a capacity of up to 12 soldiers. The vehicle would be powered by a Hyundai D4DB engine with only 130 horsepower maximum output and be protected in accordance with the STANAG 4569 level 2 certification; optionally this can be raised to level 3. Another option for the 4x4 Otaman concept was adding a manually or remotely operated weapon station with a heavy machine gun as armament for self-defence.

The six wheeled version of the Otaman was presented in the configuration as self-propelled 122 mm gun. According to Russian sources the gun is the old Soviet-designed 2A18 howitzer from the 1960s, which has also been used on the tracked 2S1 Gvozdika self-propelled gun. This gun has a range of about 15 kilometres with conventional and 21 kilometres with rocked-assisted ammunition. It is suited for general fire support operations, to take out fortified positions and to engage lightly and medium armored vehicles.

The combat weight of the six-wheeled Otaman version is 16,000 kilograms. It is not clear if this is a reference to the specific variant with 122 mm gun in a turret or the baseline vehicle. Unlike the 4x4 and the 8x8 versions of the Otaman, the 6x6 Otaman seems to employ a newly constructed chassis. The baseline variant of the 6x6 Otaman is meant to be a pure armored carrier vehicle. The vehicle is powered by a German Deutz engine with an output of 290 or 320 horsepower. According to the datasheets of the exhibition, the engine is linked to a transmission manufactured by the Alission - this might be a typo and refer to the US company Allison instead, which provided transmissions for various military vehicles.


The vehicle's protection is provided by it's welded steel construction. This protects against small arms and assault rifle ammunition only. The interior might be fitted with a spall-liner made of kevlar or other poly-aramides. Via the installation of an applique armor kit, the ballistic protection can be raised to meet STANAG 4569 level 4 (all-round protection against 14.5 mm AP ammunition from 500 metres distance).
Aside of the self-propelled gun and the armored personnel carrier, the specifications sheet from Arms and Security 2016 also mentions a possible infantry fighting vehicle (IFV) variant, an armored recovery vehicle (ARV) variant, a mobile command post vehicle aswell as a mortar carrier.


The 8x8 version of the Otaman is apparently based on a rebuild BTR-60, but is also offered as modernization option for the BTR-70. The Otaman 8x8 is offered with the same Deutz engine and Alisson (Allison?) transmission as the 6x6 variant. It is however lighter, with a combat weight of only 13 metric tons. The 8x8 is not offered with an optional applique armor kit. Apparently the drivetrain and/or suspension of the BTR-60 is not capable as supporting as much weight as the counterparts used on the six-wheeled chassis. 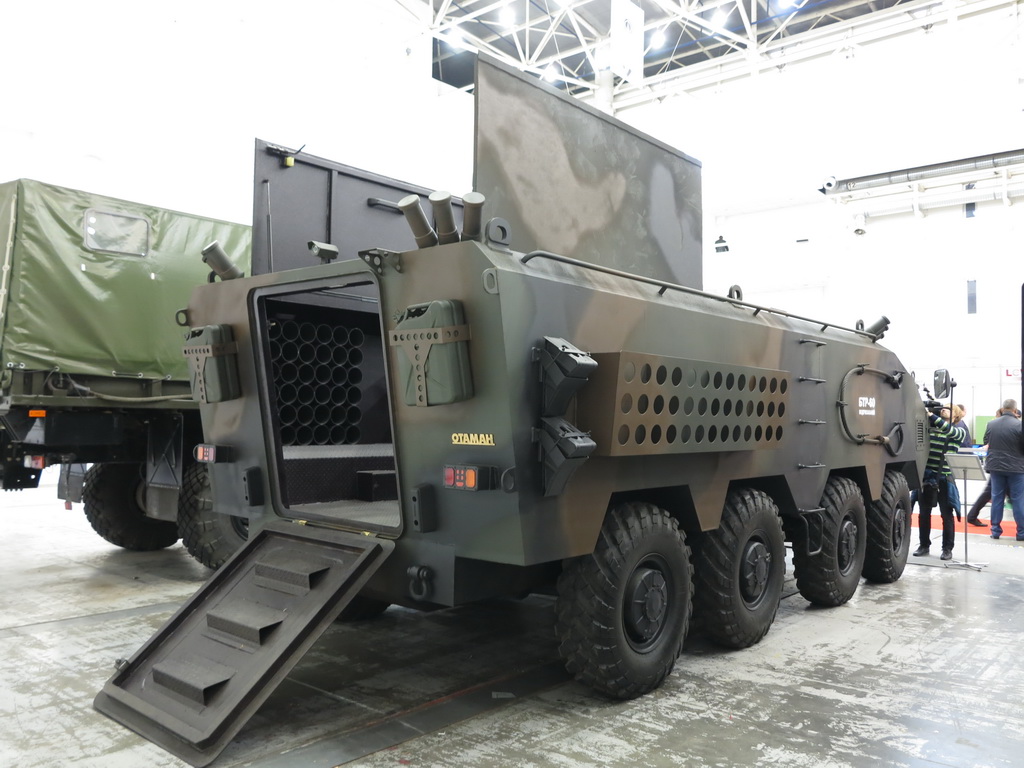 The Otaman 8x8 was presented in the configuration as mortar carrier with a 120 mm mortar mounted in the rear compartment. The same six variants as available on the 6x6 Otaman - APC, ARV, command post vehicle, mortar carrier, IFV and self-propelled gun - are also offered based on the 8x8 vehicle.


Already one year earlier a rebuild of the BTR-70 was presented at the Arms and Security 2015 exhibition. The vehicle was known under a different name and apparently made by a different company. Apparently the Ukranian defence industry is not capable of designing new vehicle by itself or the budget is too limited for it. Instead Ukrainian companies and volunteer units like the Azovets brigade, keep upgrading and redesigning old vehicles.
Posted by m.m. at 7:24 AM