Iran's new Karrar main battle tank (MBT) is apparently just an upgraded T-72S Shilden tank with a few add-ons. This has been speculated since the first days after the reveal  of the Karrar tank in official Iranian video footage. These speculations have been confirmed by different sources in the past weeks.


A user of the Armored Warfare forum, Reforger_OS,  already pointed out several similarities between the Karrar's rear hull and the corresponding areas of a T-72 hull a few days after the first footage of the Karrar was published. Apparently the Karrar uses the same quick release and mounting mechanism for the additional fuel barrels, which are a common feature of the Soviet era main battle tanks.


In general this doesn't mean that the Karrar is not based on technology or components transfered from Russia or another country with the aim to create a new tank (or upgrade existing tanks to an improved configuration) that appears to be similar to the Russian T-90MS. In theory the fuel barrel mounting system or other parts of the T-72 tank could have been recycled for the development of the Karrar in an attempt to reduce infrastructure constraints, aswell for easier maintenance and training. However it is actually not possible to say much about the Karrar just based on this short analysis of the Karrar's hull rear alone. It just shows that it is not based on a T-90 or T-90MS hull, but instead uses a T-72-like fuel drum mounting mechanism.


In the past days however further evidence on the Karrar's true nature has found it's way on the internet. A photograph of a video, which is showing a partly disassembeld Karrar MBT, has been posted on several forums and blogs after originally being published via Twitter. 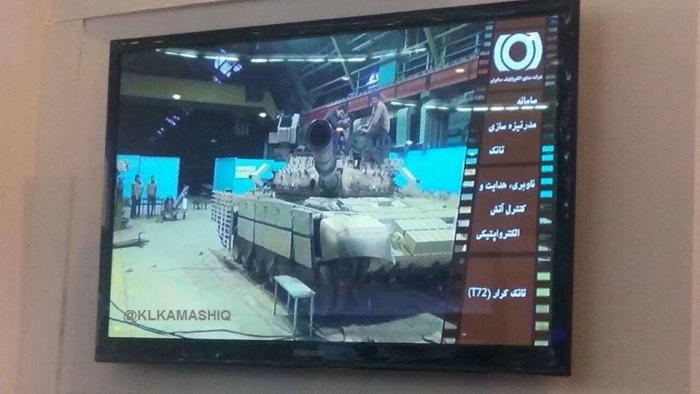 The Karrar is just an upgrade of the T-72S. It is fitted with new explosive reactive armor (ERA) at the hull front, the hull sides and supposedly at the turret. The rear is protected by slat armor, while side skirts made of rubber with a wave-shaped pattern are installed at the hull sides below the ERA. The tank is also fitted with a new remote weapon station (RWS). There are currently no indications that the fire control system (FCS), engine or the base armor composition have been upgraded or altered.

Speaking for the Karrar being a local development instead of an upgrade using Chinese, Russian or Ukrainian technology are a number of obvious factors. The tank is still based on the old T-72S with cast turret, while Russia and the Ukraine have discontinued the production of tanks with cast turret. The shaped and size of the new ERA doesn't match with existing solutions for MBTs from Russia, the Ukraine or China. Why would for example Russia develop a new type of ERA just for export, when the Kontakt-5 and Relikt heavy ERA are proven and available? The lack of upgrades to engine and fire control system also speaks for this most likely being a local development based on the limited technology available to Iran.


Overall it seems reasonable to assume that the Karrar is purely a local upgrade and does not consists of technology based on the similar looking T-90MS from Russia. While the similarities in appearance between the Karrar and T-90MS are undeniable, this seems to be result of Iranian tank designers attempting to copy the designs from other countries for unknown reasons. Originally there seemed to be an easy explanation for the similarities between the Iranian Zulfiqar 3 main battle tank and the M1 Abrams: by making the Zulfiqar 3 look like an Abrams, the tank's survivability against Western weapon systems would be indirectly increased. In case of a war against Iran, US/NATO aircraft wouldn't target the Zulfiqar 3 in order to prevent accidental blue-on-blue attacks (friendly fire) against Abrams tanks. In the same manner, US/NATO ground forces most likely would check twice when seeing a Zulfiqar 3 tank instead of immediatly shooting or calling for artillery/air strike. Unless the Iran considers a war against Russia in the near future as remotely possible, there doesn't seem to be much tactical sense in making the Karrar tank look similar to the T-90MS. It could be a pure propaganda measure, but honestly this seems to be quite a bad choice. Maybe it is a new approach to the proverb "form follows function" based on trying to reverse-engineer other tanks using the few technologies available to the Iranian tank designers. An advantage of this behaviour could be, that one can be sure somebody with more experience in main battle tank development put some thought into designing the original tank earlier. Well, at least they didn't put a T-55 turret on a M47 hull this time.
Posted by m.m. at 3:59 PM