Jordan has received an initial batch of 16 ex-German Marder infantry fighting vehicles (IFVs) on the 11th December of 2016 as part of German military aid. The delivery also included 20 mm RH202 autocannons, spare parts and a Marder driver training vehicle. It must be noted that the permission for an export of 24 Marders, 28 Rh 202 autocannons and one Marder driver training vehicle to Jordan was given for 2016. The costs of this equipment is €12.8 million. This means that most likely a second batch of Marders will be shipped this year. A total of 50 Marder IFVs are being delivered to Jordan until end of 2017. Furthermore Jordan is set to receive surveillance equipment, 56 vans and 70 trucks.
The military aid to Jordan is part of a bigger initiative, which costs about €100 million in 2016 and €130 million in 2017. Other recipients of the German military aid are the Iraq, Tunesia, Mali, Nigeria and Niger. Jordan received about €25 million from the German government in order to be able to purchase the Marders.

The Marder IFV is an older design, being introduced into German Army service in 1971. It replaced the HS.30 Schützenpanzer lang, the first infantry fighting vehicle of the world. While offering only average firepower for it's time, the Marder was designed to feature a higher degree of armor protection, being heavier than all other IFV counterparts of the same era.


Jordan received the Marder 1A3 variant, which can be identified by the thicker armor, but still features the old sideskirts with a wave-pattern. This version features no additional mine protection plate, which seems to be a miscalculation, based on how improvised explosive devices (IEDs) and mines are commonly used by insurgents and terrorists.
The main change in the Marder 1A3 compared to earlier versions is a further layer of spaced armor being fitted to the front, sides and also the roof. This raised the weight of the vehicle by about 5.5 metric tons. The exact protection level of this armor is unknown, but it has been tested against 30 mm ammunition (either AP or APDS) fired from 400 metres distance without any penetration of the main armor. The sides are resistant against 14.5 mm AP ammunition fired from short ranges.

The exact thickness of the add-on armor is still unknown, but it's frontal add-on plate is estimated to be about 7 to 10 mm thick. The add-on armor is spaced several centimetres apart form the base armor, the steel stand-offs include a special rubber padding. This allows the armor to be a lot more effective than just a single layer of steel with equal thickness. Unlike many other combat vehicles such as the Bradley and Warrior, the Marder's armor upgrade also enhanced the roof protection.


The biggest downside of the Marder is the firepower. While being rather well armed in the 1970s and still very acceptable in the 1980s, the lack of firepower upgrades has worsened the situation. The Marder has no fire on the move capability and hunter/killer capability, two features that were added to the M2A3 Bradley in the late 1990s. The 20 mm Rh 202 autocannon of the Marder was still capable of defeating the Soviet-designed BMP-1, BMP-2 and BMP-3 at 1,000 metres or more using the APDS ammunition.

The original upgrade proposal of the German industry that lead to the Marder 1A3 also featured a 25 mm autocannon and a 720 hp engine, but neither of these features were not adopted by the German Army. A main reason for this the development of a Marder successor, starting with the Marder 2 infantry fighting vehicle developed in the late 1980s. The development of the Marder 2 was started in 1984 (first requirements), the first prototype was delivered in 1991. The collapse of the Soviet Union however meant a re-thinking of the German defence doctrine, which lead to the cancellation of the Marder 2. After the Marder 2 project was ended, the requirements for a new IFV were incorporated in the Neue Gepanzerte Plattform (NGP, "new armored platform") in 1996. While the original NGP was meant to include a modular chassis for all tracked combat vehicles (including main battle tanks, recovery vehicles, self-propelled guns, etc.), all of them were canceled except for the IFV. The IFV version of the NGP then became - after numerous design and requirement changes, reducing the maximum weight by 45% - the current Puma IFV. In German service the Marder 1 is currently being replaced by the Puma IFV, it entered service in 2014.


Meanwhile Germany has decided to upgrade a small amount of Marders as a result of cuts to the Puma order (reduced from 410 to 350 vehicles) and production delays (most of which are result of modifying the Puma's design to meet new requirements). The upgrade is scheduled to include new thermal imagers for 200 Marders and the MELLS (multi-role guided missile system), a version of the Israeli SPIKE-LR anti-tank guided missile.
The Marder has been exported to Chile and Indonesia. 237 Marders were sold to Chile, while Indonesia bought only 50. A sale of more than 400 Marder 1A3 IFVs to Greece failed due to the international finance crisis. Tunesia is scheduled for receiving the Marder infantry fighting vehicles in an unknown quantity.

Aside of the planned German Army upgrades to optronics and missile system, a number of further upgrade options are available for the Marder. A very simple upgrade option is replacing the turret with an off-the-shelf turret design for enhanced firepower. KUKA, now a part of Rheinmetall, offered the M12 with Mauser 30 mm autocannon for the Marder in the late 1990s. Furthermore a number of different turrets have been tested on the Marder during the 1970s to 1990s. 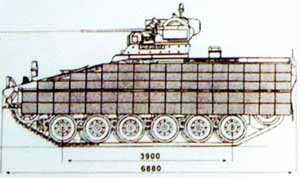 The protection can be enhanced by installing add-on armor, the Marder still should have enough weight left for this. Two types of explosive reactive armor, the French BRENUS and the German CLARA designs, have been tested on the Marder. Alternatively slat armor or lightweight composite armor such as RUAG's SidePRO-RPG could be fitted to the Marder, if needed (Germany considered slat armor a bad solution and has rejcted the use of it). The Active Defence System (ADS) developed by IBD Deisenroth in cooperation with Rheinmetall has been tested on the Marder 1A5.

More complex upgrades inlcude the Marder CCV, which was developed for Canada's close combat vehicle (CCV) requirement. This variant is fitted with thick layers of AMAP composite armor, a remotely-controlled Lance-RC turret with Wotan 30 mm chain gun, an air conditioning unit and an upgraded engine. The Marder CCV has not been purchased by any country yet.

The new Lynx family of combat is believed to be based on the Marder 1A3. More specifcially, the Marder hull is used as the base of the Lynx, but essentially all internal components are replaced by Rheinmetall. The powerpack is changed, the tracks are replaced, a new turret is fitted, some armor elements are replaced. the Lynx also includes modern computer systems and optics.
The IFV variant of the Lynx is fitted with a two-men Lance modular turret armed with either a Wotan 30 mm or 35 mm chain gun. These guns have a magnetic coil for firing Rheinmetall's suite of programmable ammunition. Furthermore the turret can be fitted with a remote weapon station (RWS) slaved to the commander's main optic and a dual-launcher for SPIKE-LR ATGMs. The Lynx has been offered to Australia as part of the LAND 400 program.
Posted by m.m. at 8:50 AM